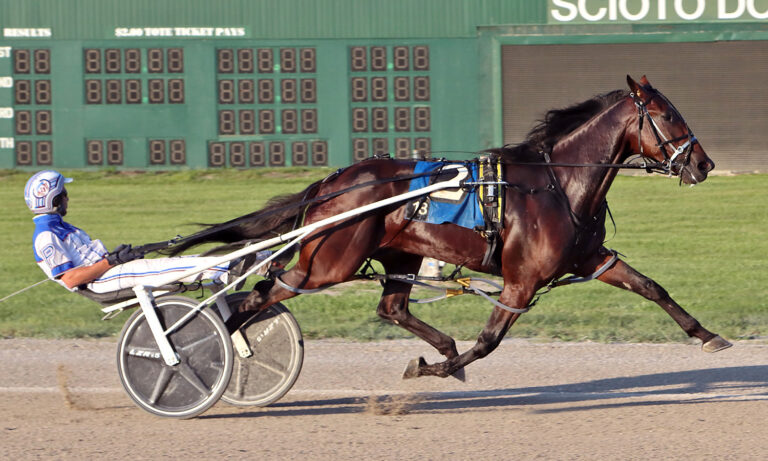 Two Eliminations Needed For $641,550 Classic
The quartet of Bythemissal, Greatest Ending, Fourever Boy and Pleaseletmeknow lead a balanced field of 11 for the $641,550 Little Brown Jug, presented by the Ohio Harness Horsemen’s Association, to be held Thursday (September 22) at the Delaware County Fair.
The first $50,000 elimination will feature one of the two $45,000 supplemental entrants, Bythemissal (driver Chris Page – Post #2).
Bythemissal is owned by the Burke Racing Stable, Eric Good, Rich Lombardo Racing and Weaver Bruscemi and conditioned by Ron Burke.
He is the gelded son of Downbytheseaside and is looking to be the first Ohio bred Jug champ since BJ Scoot (1988).
Bythemissal had only one start as a two-year-old but had made up for lost time this season. He has amassed over $537,000 in earnings thanks to wins in the $350,000 Adios Pace Final and the $300,000 Carl Milstein Memorial.
Greatest Ending (Mark MacDonald – Post #4) is owned by Reginald Petitpas and trained by Dr. Ian Moore, who won the 2008 Jug title with Shadow Play.
The son of Somebeachsomewhere won the $200,000 Max Hempt Memorial Consolation and was second
In the $253,000 Pennsylvania Sire Stake Final.
The second elimination is headlined by Fourever Boy and Pleaseletmeknow, the second supplemental entry.
Fourever Boy is coming into the Jug on a two-race win streak – the $65,537 Simcoe Stakes and the $253,000 Pennsylvania Sire Stakes Final.
The bay son of Sweet Lou is co-owned by the Micki Rae Stables and trainer Tim Twaddle.
Pleaseletmeknow (Andy McCarthy – Post #6) was recently crowned as the New York Sire Stakes champion. He is trained by Travis Alexander for the Fiddler’s Creek Stable.
He is the homebred son of American Ideal. Pleaseletmeknow has eight seasonal wins in 12 starts and has earned $522,194 in his lifetime.
The top four finishers in each elimination come back for the $541,550 second heat.