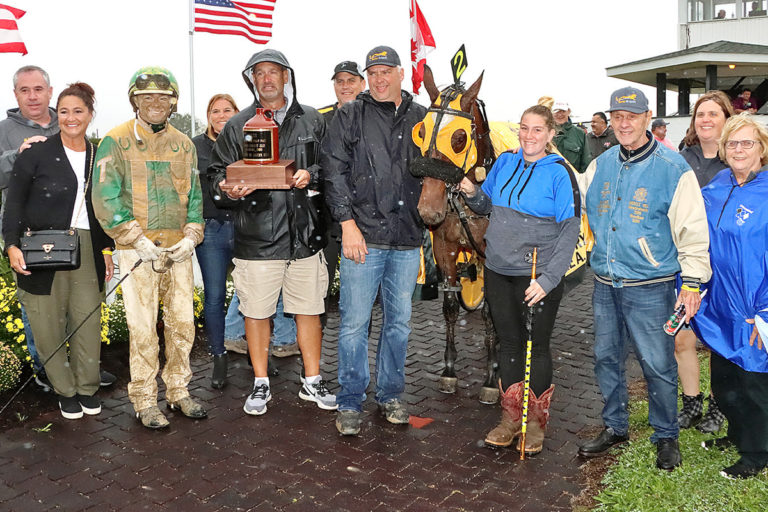 Scarlett Hanover and driver Tim Tetrick overcame a day-long rain and a field of eight to win the $253,800 Jugette for three-year-old filly pacers on Wednesday (September 22) at the Delaware County Fairgrounds.

In the $152,280 final, the 43-1 longshot Paula’s Bet Hanover (Yannick Gingras) grabbed the early lead and controlled the fractions of :29, :58.4 and 1:28. David Miller came first up with Test Of Faith, providing cover for Tetrick and Scarlett Hanover to sprint past the leaders to record a half-length win in 1:56 over a track rated as ‘sloppy.’

“The last half of the card, the front end has not been very good at all, I wanted to get away in the back. I was hoping one or two wanted to take a shot. It worked out perfect…my mare got it done,” said Tetrick.

“The track crew did as good of a job as they could. There was a lot of weather, a lot of rain.”

“We are thrilled with her effort today. She was great,” added co-owner Mark Weaver. “A lot of the credit goes to Ed and Ashleigh Hensley who train some of our horses in Canada. They had her ready and have done a fabulous job with Scarlett Hanover.”

The Bettor’s Delight filly was a $45,000 yearling purchase from the Hanover Shoe Farm consignment.

In the second $50,760 elimination, Test Of Faith defeated the Irish invader OakwoodAnabella Ir (Ronnie Wrenn, Jr.) by a half-length in 1:55.3. Fellow supplemental entry Smothastenesewisky (Brett Miller) was third and Odds On Whitney (Tim Tetrick) was fourth.

Hot As Hill (Joe Bongiorno) took the lead before the quarter mile station and never looked back in a 6 ¾ length score in 1:57 in the first $45,825 division of the Buckette for three-year-old filly trotters.

Hot As Hill won for the fourth straight time and pushed his career earnings to $247,511.

The Bar Hopping filly defeated May Karp (Tim Tetrick) and Dutiful (David Miller) by a half-length.

The Swan For All filly, who picked up her second career win, is owned by Al Libfeld and trained by Anette Lorentzon

The heavy 1-9 favorite A Girl That Twirls (Andrew McCarthy) did not disappoint in the $42,710 Standardbred pace for freshman fillies.

A Girl That Twirls scored a 1:59 mile and three-quarter length win over Gonna B Good (Tyler Smith) and Wine And Dine Me (Joe Bongiorno).

The American Ideal filly won for the third time this season for owner D Racing Stable and trainer Deborah Daguet.

The Uncle Peter filly was able to get by the pacesetting Gabbys C Note (Aaron Merriman) in mid-stretch to win in 2:02.2. Purple Aura (Anthony MacDonald) rallied for third.

The six-year-old son of Manofmanymissions won for the 32nd time in his career defeating Shine All The Way (Ronnie Wrenn, Jr.) by a half-length. Pure Chance (Aaron Merriman) and Yes (Anthony MacDonald) were third and fourth.

The 20-race card for the 76th Little Brown Jug, presented by the Ohio Harness Horseman’s Association, will get underway at 12:00 Noon on Thursday (September 23).